Workout Wednesday: How I Lost 90 Pounds 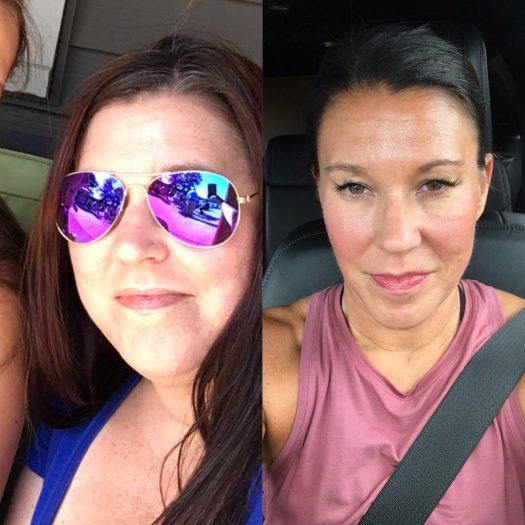 I am not sure this necessarily fits in the “Workout Wednesday” category, but I am not sure where else to put it. I have mentioned on here multiple times about my weight loss, but never really went into a ton of detail.  So here goes!

Weight Watchers (August 2016 – February/March 2017)
My cousin (@ww_beyond.the.scale) had been posting about her amazing weight loss from Weight Watchers and I decided enough was enough, I was going to lose weight too.  So without telling anyone (I didn’t even mention it to B – he was out of town anyway), I joined Weight Watchers online. I started tracked my food religiously and rarely went over my points.  It was pretty shocking at first to discover how much food I had been eating compared to how much I should have been eating.  And honestly, it made for some very long and hungry days.  After about six months I felt like I had it under control and didn’t necessarily need the WW App anymore.  I stopped my subscription and told myself I could sign back up if I was gaining weight without it.  I never needed it again.  But at first, it was critcal.

What I Ate
I quickly realized that I needed to eat more filling foods instead of high point foods that still left me hungry.  For example, one piece of pizza is just not as filling as an entire spaghetti squash.  I ate a ton of grilled chicken, spaghetti squash (spray butter + 2tbsp of parm. cheese), cauliflower rice, broccoli, etc.  Every once in a while I had some chocolate chips (hey a girl has to live) too.  I still drank Diet Pepsi (I know it’s bad for you but man do I love it) and had a “cheat meal” every once in a while, but 95% of the time, I stuck to the plan. And drank a ton of water.  A TON.  Plus every morning I drank Spark.  It’s from Advocare (full disclosure – I am a distributor) and is a vitamin / energy drink.  I’d dump a scoop into 32 ounces of water and would drink it all before eating anything in the morning.  I’m not saying it helped me lose all that weight, but it helped to slow me down and to make better decisons about what I was going to eat that day.  I think the first few weeks were the hardest.  The scale was going down, but I couldn’t really see a difference in the mirror.  After about two months I could see the difference (and so could other people) and it was way easier to stick with.

Exercise
From August 2016 – April 2017, I walked.  I basically hadn’t been doing anything before, so making sure I was getting 10,000+ steps in a day was huge.  I walked outside when it was nice out and used my treadmill in the basement during the winter.

April 2017
By April 2017 I had lost about 70lbs.  So 70lbs in about 8 months.  I knew I did NOT want to go back to where I was before, but also wanted to eat more treats.  I bought a package a local cycle studio that had just opened by my house and started working out (not that walking isn’t a workout, but you know what I mean). I figured workout more = eat more.  And that was totally true for me.  I don’t (well didn’t) love going and taking new classes alone, so I brought a friend with me. Plus, I quickly learned that spin / cycle is the least intimidating workout you can try.  It’s in the dark, the music is loud and no one really pays attention to each other – I was all for that!

Summer – Winter 2017
I continued my spin classes (and we got a Peloton to use at home) and got brave and tested out Orange Theory for a few months ( I loved it, but it just didn’t fit my schedule with the kids being home from school for the summer).  If you are new to working out and just don’t know what to do (I have this issue), I highly recommend Orange Theory.  Everything is customizable, the classes fly by and they are fun – not intimidating at all.  Because I was working out so much (5 days a week) I was able to start eating more.  Maybe one night I’ll have 4 pieces of pizza and breadsticks dipped in ranch, but the next time I’ll make sure to have cauliflower rice and grilled chicken.  Balance.

January 2018
I started running (consistently) in January.  I was in a Facebook group that was doing a 100 mile challenge.  You could row them, walk them, run them, bike them, you name it.  I decided to run mine because I knew it would be a challenge because I was NOT a runner.  This was so good for me and I feel like it leaned me out quite a bit.

March 2018 – Current
I discovered Pure Barre in March 2018 and fell in love.  I now do a mixture of running, barre and cycling. I am not necessarily trying to lose any more weight, but I do want to tone and get stronger.  I wouldn’t say I eat whatever I want, but I certainly don’t limit myself either.  If I go on vacation and want to eat whatever I want for a week, that’s what I am going to do.  I also know that when I come home, it will be time to get back to work!

Right Now
All in all I have lost about 90lbs which sounds so crazy and I am almost embarassed to admit it, but it is what it is. I have discovered that working out is great not only for me physically, but mentally as well.  I feel so much better about myself and just life in general after I workout.  If I’m annoyed / frustrated / stressed, a 30 minute run on the treadmill in the dark (yes, I like to run in the dark) with the music blaring does wonders for me.

People have asked me what my secret was to lose weight and really there isn’t one other than hard work.  There isn’t a magic potion that’s going to make you drop a ton of weight AND let you keep it off. I did the The Advocare 24-Day Challenge a few times and did get great results, but after it ended the wheels fell off and I just went back to my old habits.  You gotta be ready to commit and to be ready to be uncomfortable (aka hungry)!  It’ll all be worth it though. I promise.

TLDR
I lost 90lbs from Weight Watchers, eating way less, walking and then working out more.

As usual I am not a doctor (or even close) and none of this should be taken as medical advice.  Consult your doctor to see what is right for you!

This entry was posted in Blog, Workout Wednesday. Bookmark the permalink.

33 Responses to Workout Wednesday: How I Lost 90 Pounds